Buying a Home? You May Have Missed an Important Step Anyone who is going through the process of buying a home knows that it can be a long and expensive process. And it’s one that you need to get right to build a solid financial future. From finding the right realtor to determining the most important factors for your next home, there are many important steps to take. Luckily, 360 Degrees of Financial Literacy and Feed the Pig are here to help. Here are four essential tips (including one many people overlook) to help you with the home-buying process:

Continue reading "Buying a Home? You May Have Missed an Important Step" »

Are You Helping Protect Your Older Clients From Financial Scams? 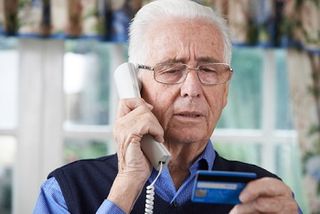 Most everyone, at least once, has received an email from a “Wealthy Prince” who claims to know of a massive inheritance in their name. If only you would wire $10,000 U.S. to unlock $10 million … Sounds too good to be true, right? It is. In order to get the inheritance, this “Wealthy Prince” typically requires you send your bank account information, social security number, birthdate and other personal information. This leads to a financial disaster.

Unfortunately, this is just one of an increasing number of financial scams that people have fallen victim to, especially older Americans. Recently, an American World War II veteran was scammed out of $43,000 due to a fake sweepstakes that told him he won $4.7 million and a new Mercedes-Benz, as long as he provided personal information and opened a bank account where the money could be deposited. The elaborate scam involved multiple bank transactions over an extended period of time, each with the purpose of gaining the victim’s trust. Unfortunately, once the money is wired, it is very difficult to recover.

Continue reading "Are You Helping Protect Your Older Clients From Financial Scams?" » With songs like “Purple Rain” and “Little Red Corvette,” Prince wrote the soundtrack of a generation.

However, his failure to write a will could spell trouble for his $250 million fortune. Last week, people around the world mourned the death of this gifted singer and songwriter, and many were shocked to hear that Prince didn’t have a will or an estate plan in place. Even though he was a notoriously hands-on negotiator who meticulously controlled the intellectual property rights of his song collection, this unfortunate lack of planning has left uncertainty for Prince’s heirs. The future inheritance process could cost tens of millions of dollars in legal fees, and state and federal estate taxes. Surprisingly, he’s not the first famous person who left this world without a plan.

Not yet famous with a quarter billion dollar estate to leave loved ones? It’s still important to draft a will and keep it up-to-date based on changing personal and financial situations. Here are a few tips to make sure you have an effective will:

Back to School: Budgeting 101 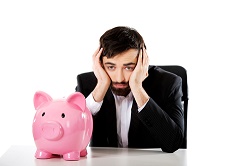 For CPAs, budgeting is as easy as debits on the left, credits on the right. It is simply the way it is. But not everyone is a talented budgeter. A recent AICPA survey revealed that college students aren’t as monetarily savvy as they think they are.

Just how much do college students need to brush up on their budgeting skills? While 57 percent of students surveyed rated themselves as having excellent or good personal financial management skills, nearly half reported having less than $100 in their bank account at some point in the last year, 38 percent said they had borrowed money from friends or family in the last year, and 11 percent had missed a bill payment. It is clear that college students’ perceptions of their financial skills and reality are not aligned.

Continue reading "Back to School: Budgeting 101" »

Back-to-School: How to Pay for College 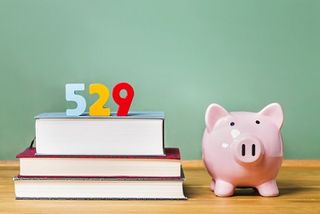 Sleepless nights are an unfortunate reality when you become a parent. And nothing can get parents tossing and turning like thinking about how they will pay for their son or daughter’s college. For the very financially minded, this worry may arise as soon as you find out you’re expecting. Others may not start to worry until much later. No matter your child’s age, the staggering cost of college is likely to become a concern at some point. Consider this: a four-year education at a private college is on track to cost $323,900 by 2033. Might as well give up now, right? Wrong. You can build your child’s college fund slowly and steadily as you go from changing diapers to handing over the keys to the family car. The solution? A tax-deferred savings plan.

Continue reading "Back-to-School: How to Pay for College" »

Are You Cheating on Your Spouse Financially? 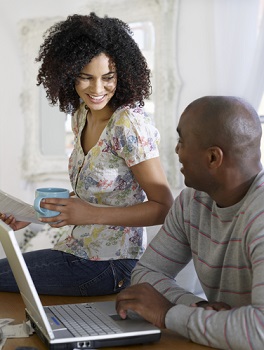 Do you have a secret bank account or credit card that your spouse doesn't know about? Do you lie to your partner about how much you really spend? The topic of financial infidelity, whereby spouses lie to one another about money, emerged as one of the surprising topics of discussion at a recent meeting of the AICPA National CPA Financial Literacy Commission in Washington, DC.

Commission members discussed a recent creditcards.com financial infidelity report that showed that about 20 percent of people admit to spending $500 or more without telling their significant other. According to the study, men are more likely to both spend more than $500 and have a secret account.

One way to prevent this is by setting aside some time with your partner (away from busy or stressful times) and having an open discussion about your spending and financial goals. Another solution offered was to have a joint account, but open separate accounts to make individual purchases. The key is having a trusting partner with whom you can have an honest and open dialogue about your finances.

Continue reading "Are You Cheating on Your Spouse Financially?" »

Fall Review of State Legislative and Regulatory Issues: Part 2 of 2

Across the county, state legislatures considered numerous issues that impact the CPA profession.  In part two of this two-part post, we review issues dealing with: CPAs providing services for marijuana-related businesses, state board of accountancy reorganizations, sales tax on professional services and peer review. 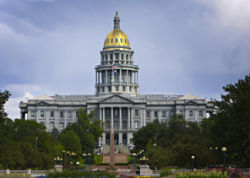 An issue with implications for the CPA profession centers on the legalization of marijuana for both recreational and medicinal use.  While the sale and use of marijuana is illegal at the federal level, state governments and voters are increasingly showing a willingness, in certain jurisdictions, to decriminalize the drug. In November 2012, voters in Colorado and Washington approved ballot measures legalizing the recreational use of marijuana.  A total of 19 states and the District of Columbia have laws permitting the use of marijuana for medical purposes. The AICPA, with input from the Colorado and Washington state CPA societies, has developed an issue brief that gives an overview of U.S. recreational and medicinal marijuana laws, the current legislative/regulatory environment and information for CPAs considering providing services to businesses that operate in these industries (including a list of questions for CPAs to ask themselves before considering this line of work).

Fall Review of State Legislative and Regulatory Issues: Part 1 of 2 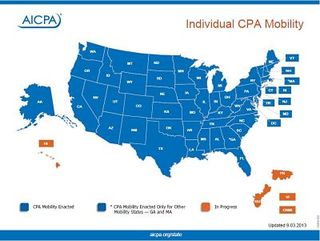 Currently, 49 states and the District of Columbia have passed individual CPA mobility laws and the remaining U.S. jurisdictions are working toward this goal.  These laws allow CPAs to operate across state lines without obtaining reciprocal licenses in each state in which they practice.  New state legislation is sometimes proposed in a way that can have unintended consequences on the profession’s mobility regime.  This year, there were three particularly noteworthy areas where CPA cross-border practice could have been put in jeopardy.  These included: