Social Media Fear? To Quote the Eagles: “Get Over It”

I saw the Eagles play the PNC Arena in Raleigh a few weeks ago. You know… Hotel California. Desperado. Witchy Woman.

It was a rocking show from a band—and a brand—that has been going at it for more than 40 years. I’m a huge fan and I wanted all my friends to know I was there.

Which is why I was pretty disappointed to see signs at the security gate, banning phones, texting, photos and videos inside the arena. I thought it was a joke, but… no. The Eagles were dead serious and the arena staff was fully empowered to enforce the rules. Several times, I saw ushers scolding concertgoers, keeping them from posting selfies from this historic event.

Come on, guys! Take it easy!

Continue reading "Social Media Fear? To Quote the Eagles: “Get Over It”" »

In this final session I will be covering from the AICPA's E.D.G.E. Conference in Austin, Texas, Donna W. Salter, Senior Manager, Young Member Initiatives, AICPA, moderates a panel of young CPAs. Learn how some very involved, young CPAs use their talents and skills to help impact the profession on the state and national level. By investing their time, these professionals have ultimately created a win-win situation—the profession addresses the leadership pipeline issues by training these young CPAs as volunteers, and they, in turn, get tons of leadership experience, mentoring, and professional development. Panelists include:

Advancement of Women in the CPA Profession [LIVE BLOG]

This week I am live blogging from the AICPA's E.D.G.E. Conference being held in Austin, Texas today through Friday. The first session I am covering is "The Top Seven Issues Facing Young Professionals." In this session, Tom Hood, CPA.CITP, CGMA, CEO, Maryland Association of CPAs, will share the latest research on the issues that are top of mind for the young CPA professional, and share tips and techniques to deal with them. These issues include:

How Specialization Can Improve Your Service Offerings

In our last live blog session from the 2013 Practitioners Symposium and Tech+ Conference in Partnership with the Association for Accounting Marketing Summit, Jerry Love, CPA, CGMA, ABV, PFS, CFF, CITP of Abilene, Texas, offers insight as to how CPAs can specialize and improve their bottom line. Specializing will:

Continue reading "How Specialization Can Improve Your Service Offerings" »

What is the Next Generation of CPA Firms?

Join the new generation of CPA who is finding success by reimagining and recreating the traditional CPA firm for the 21st century at the 2013 Practitioners Symposium and Tech+ Conference in Partnership with the Association for Accounting Marketing Summit.

Get ready to renew your commitment – and be inspired anew – to transform your life, and the lives of colleagues and clients for the better.

Join Rick Telberg as he moderates this panel of young CPA professionals including:

Continue reading "What is the Next Generation of CPA Firms?" »

Are You Using Digital Signatures?

Kicking off day two of the 2013 Practitioners Symposium and Tech+ Conference in Partnership with the Association for Accounting Marketing Summit is the session "What‘s in the Future for Digital Signatures?." Business in general, and the CPA profession specifically, have long sought a solution to the inefficiencies of ink and paper-based signatures. Has technology finally solved the problem or do we continue to wait? There are many popular “solutions,” but do they really solve the problem(s)? This session, presented by Erik Asgeirsson, CEO, CPA2Biz, a subsidiary of the AICPA, and Brian Fox, CPA, founder of Confirmation.com, will define the problems and compare and contrast some of the proposed solutions. (Email subscribers: See the live blog coverage on AICPA Insights).

Earlier today, the AICPA announced the launch of the Financial Reporting Framework for Small- and Medium-Sized Entities. This session at the 2013 Practitioners Symposium and Tech+ Conference in Partnership with the Association for Accounting Marketing Summit covers AICPA Director of Private Company Financial Reporting, Robert Durak, CPA, CGMA, as he highlights key features and benefits of the Financial Reporting Framework for SMEs, as well as important accounting topics within the FRF for SMEs. You can find more information on the framework by following #MainStFinancials. (Email subscribers: See the live blog coverage on AICPA Insights).

New Taxes and the Cost of Healthcare and Insurance

The 2013 Practitioners Symposium and Tech+ Conference in Partnership with the Association for Accounting Marketing Summit takes place June 10 to 12 in Las Vegas. I am live blogging from select sessions throughout the three days. The first session is "The Impact of Healthcare Reform on Small Business: New Taxes and the Cost of Healthcare and Insurance" with Mark Dietrich, CPA/ABV, of Framingham, Mass. Mark wrote a prelude on AICPA Insights which generated a lot of interest and conversation.

This session covers the Accountable Care Act, which is the most significant and costly social spending legislation since the Great Society programs of the 1960s. Its impact extends beyond health insurance, and envisions a system of regulation and taxation that aims to restrict the impact that income has on access to healthcare, except the wealthiest top .1% (one-tenth of 1%) of taxpayers. (Email subscribers: See the live blog coverage on AICPA Insights).

Continue reading "New Taxes and the Cost of Healthcare and Insurance" »

Wise Advice from the New Kid 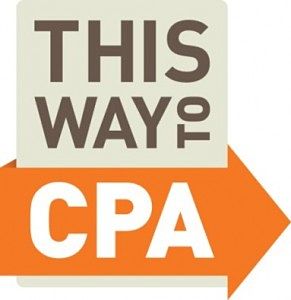 What’s the best advice to give virtually anyone starting a new job? Corey Cines, blogger with the AICPA’s This Way to CPA website, wrote “From Backpack to Briefcase: How I handled the jump into Public Accounting,” to offer his tips for starting life as a firm newbie. It’s excellent advice for any young CPA looking to build a foundation in accounting. Not only that, Corey’s great advice also applies to anyone transitioning into a new role or a new organization.

Asking “dumb” questions, staying positive and practicing stress relief: these are just some of Corey’s gems for getting the lay of the land.

We asked several AICPA CPAs on staff what advice they wish they had gotten when they first entered the accounting workforce. Here are some tidbits:

The AICPA and CIMA continue to make available valuable management accounting reports and tools available for CPA, CGMAs and those considering the CGMA. Check out the following to help you develop new skills and bring best practices to your organization.

We asked our bloggers to tell us what they found interesting on the Internet this week. What would you add to this list?

Jina Etienne, CPA - I re-tweeted this post from the Colorado Society of CPAs, it generated a lot of interest and comments. “So... what's so great about being a CPA? 5 reasons here.” I even got a response from a former client whom I had recommended get her CPA. She’s finishing up school now and will take the CPA Exam next winter!

Still Not Convinced Accounting is the Way to Go?

Last week, in his Nov. 2 CPA Success blog post, How to choose a major: Step 1 -- pick accounting. QED, Bill Sheridan, CAE, electronic communications manager and editor at the Maryland Association of CPAs, affirmed that careers in accounting continue to buck trends and supply solid careers for young professionals. Sheridan said, “If you want a job in a profitable industry, study to become a CPA.” He went on to cite the latest data from Sageworks and the Bureau of Labor Statistics, which supports his point: the accounting profession is still sporting huge successes. It is expected to see further growth over the next six to seven years.

Continue reading "Still Not Convinced Accounting is the Way to Go?" »

Last week’s CPA Success post “Labor Day 2011: Laborers Wanted” cited Rick Telberg’s CPA Trendlines blog indicating that 34,800 more jobs in accounting and bookkeeping were posted in August 2011. Even as the market continues to struggle and the outcome of President Obama’s jobs plan remains unknown, this is still good news for the profession. In fact, it puts pressure on the AICPA, educators and other accounting influencers to ensure that there are skilled candidates to fill these positions and the many more that will be available when the economy finally rebounds.

The AICPA is rising to this challenge and encouraging young people to learn more about the accounting profession.

The year is 2020. The global economy has rebounded, the U.S. is celebrating less than five percent unemployment and the CPA profession is experiencing record growth. Your organization is doing particularly well and what’s more, your staff, senior leadership and partners’ ability to connect with a diverse clientele is the talk of the profession. Clients include a biotech start-up seeking to cure spinal cord injuries; a women-owned IT consulting company; a Kenya-based manufacturing firm; a law firm specializing in same-sex marriage and estate planning issues; and a car dealership owned by a Native American father/son team.