Change is Scary, but Can Inspire Progress 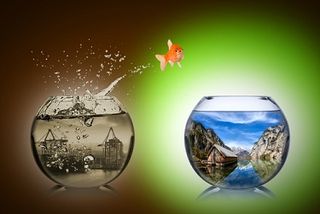 Earlier this year, the AICPA decided to phase out the “free/no CPE” option for attending section-sponsored webcasts. This “mixed model” was creating CPE compliance concerns so it was replaced with a selection of free events with CPE while maintaining the event archives for viewing content without CPE.

When the Taxation Team learned that the change would also apply to the Tax Power Hour (TPH), a monthly practice management webcast series, we were concerned about the impact it might have on our members. However, the team quickly came to realize this change was a blessing in disguise.

We had become complacent and had not really followed our own advice: always spend time working on your business, not just working in your business. We had stopped working on our business and were completely consumed with working in our business of serving members with new fresh resources. I’m falling on my sword with a public ‘mea culpa’ in the hopes that our members can learn from our mistakes with this valuable resource. As writer Phyllis Theroux said, “Mistakes are the usual bridge between inexperience and wisdom.”

Continue reading "Change is Scary, but Can Inspire Progress" »

Trust But Verify – Another Perspective on Comfort Letters

Back in March, AICPA Senior Vice President Susan Coffey wrote about the dangers of providing client comfort letters. Since then, we’ve been hearing from more and more members that they are seeing a rise in requests from third parties for some sort of assurance on client accounting and tax information, or financial condition. I think Edward Karl said it best in CPAs and Comfort Letters: The New Chocolate (from the July edition/DC Currents column of The Tax Adviser) when he described them as requests for “verification, confirmation, certification, corroboration, authentication or substantiation of their clients’ financial information.” You name it, we’ve been asked to validate it. On the bright side, an increase in these requests confirms the faith, confidence and trust that business owners, decision makers and the public have in CPAs.

Continue reading "Trust But Verify – Another Perspective on Comfort Letters" »

343,020 Reasons CPAs Should Talk Up Their Tax Expertise Now

Nearly three years ago, the IRS launched the tax return preparer oversight program and seeds were planted in the landscape of tax return preparation services.  Today, those seeds are starting to sprout.

In June, the IRS estimated there are 717,161 PTIN holders, many of which (212,975, or 29.7%) are CPAs, outnumbering Enrolled Agents (42,895) and attorneys (31,189) combined.  While CPAs have dominated the regulated tax preparation arena, that landscape is about to change. More and more people are completing the final step to becoming a Registered Tax Return Preparer, or RTRP (they have until 12/31/13 to pass the competency exam).  Currently, there are 4,893 RTRPs.  That leaves an estimated 338,127 “provisional preparers” who may join the RTRP ranks.

That means more competition is coming and it will influence the public perception of tax return preparers.  Unfortunately, the public doesn’t really understand the difference between a CPA and other tax return preparers.  We have all seen the advertisements by the big box tax preparation and software chains that inflate the qualifications of their employees.  They often compare them to CPAs or perhaps they feature a CPA in the ad, implying that every customer representative will have similar qualifications.

In January 2011, I sold my tax practice to join the AICPA but sometimes, I still find myself thinking and acting as if I am still in practice.  What I loved most about my practice were the people, especially the daily interaction with clients.  I was curious about what made them successful.  I picked up tips from successful clients and implemented them in running my business. And I learned what not to do from the not-so-successful clients.

I also wanted to learn from great thinkers.  So I read business books like “The E-Myth” by Michael Gerber, “Good to Great” by Jim Collins and “Who Moved My Cheese” by Spencer Johnson.  I was involved in my local chamber and other business or networking groups and often did presentations for them.

We asked our bloggers to tell us what they found interesting on the Internet this week. What would you add to this list?

Jina Etienne, CPA - I re-tweeted this post from the Colorado Society of CPAs, it generated a lot of interest and comments. “So... what's so great about being a CPA? 5 reasons here.” I even got a response from a former client whom I had recommended get her CPA. She’s finishing up school now and will take the CPA Exam next winter!

Stick with Clients You Can be Grateful For

Now that last year’s tax returns are done, it is time to start getting ready for next tax season. This includes making sure you get enough CPE hours, plan engagement letters, review office processes and reconsider your fees.  It also is a great time to review your client list.  I attended a 1040 update seminar several years ago where the speaker made an interesting suggestion:  Let each person on your staff recommend (with justification) one client to be fired each year.  And be sure your receptionist weighs in!

Continue reading "Stick with Clients You Can be Grateful For" »

If there are any lessons to be learned from the 1099 reporting controversy, it’s that hitting the proverbial fly with the hammer is not the best way to go after tax cheats.  The fly still lives but everything around the fly gets whacked.

What is shaping up to be Lesson #2 is a rule that will force many federal, state and local agencies to withhold 3 percent of payments to contractors for goods and services that cost over $10,000.  It covers governments with total yearly contract expenditures over $100 million, which means most states and large cities.  The rule was enacted in 2006 but its implementation has been delayed – but barring congressional intervention, it will take effect Jan. 1, 2013.  Three bills have been introduced in Congress so far to abolish it - H.R. 674 and S. 89, which would simply repeal the rule, and S. 164, which would offset the cost of the repeal with unobligated funds.

Why is the 3 percent withholding a bad idea and why is the AICPA opposing it?

Why Tax Innovation Could Be Harmful to Your Practice

What do CPAs, estate planners, attorneys, and multimillion dollar corporations (or their chief executives) have in common? They are all affected by patents being issued on tax strategies or products that were already in use in the industry.

“The current statutory scheme leads the [Patent and Trademark] Office to issue many dubious patents because it does not have the resources to properly examine the patents.”  So testified David Simon, associate general counsel for the processor giant Intel at a congressional hearing.

Why should tax practitioners care? The concept of tax strategy patents (TSPs) may seem abstract or unimportant to many tax advisors.  And, frankly, I don’t blame them. Would anyone find out whether a client of a CPA in Reno lowered his tax liability through some complicated plan involving a charitable trust?

Continue reading "Why Tax Innovation Could Be Harmful to Your Practice" »